Ireland in a race to become Europe’s data isle

With giant tech companies and private investors approving multi-million euro investments in Irish data centres, inspiratia reviews the state of the market, the drivers behind the sector’s exponential growth, and the key role of energy supply

Dublin is one of Europe’s data hubs, alongside London, Amsterdam, Frankfurt and Paris. Indeed, Ireland has become a major data centre market and now hosts approximately 52 such facilities built up over the course of the previous decade of approximately 600MW. 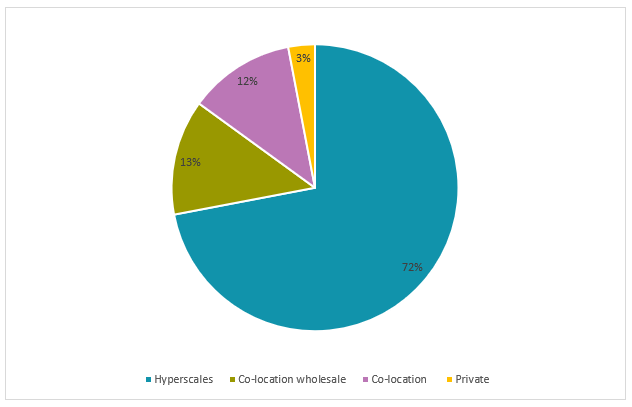 The market is dominated by hyperscale data centres – facilities owned by large tech companies such as Microsoft or Google managing the hosting of data for their clients – accounting for 72% of market share.

In May, Digital Realty commissioned a second data centre on its Profile Park campus in Dublin. The 5MW centre surpassed €200 million (£178.1m US$223.9m) worth of investment.

Data centres in Ireland by capacity

One of the main drivers behind the sector’s growth is the choice of mega-tech companies including Google, Microsoft, Facebook and Intel to build their European headquarters in the Silicon Docks hub in Dublin, a Silicon Valley equivalent located by the city’s Grand Canal Dock.

“Ireland has become a destination for tech-giants to set up large compute nodes that feed into their customer base in Europe,” Maurice Mortell, managing director for Ireland and emerging markets at Equinix, says.

“The country has been a very compelling location to do business, attracting large foreign investment, especially in the technology sector – especially from the US,” he adds.

The software giant is currently constructing a €900 million (£801.2bn US$1 bn) expansion of its data centre in Crange Castle, building four new sites of 618,110 square metres each.

Last year, the Irish Government classified data centres of over a certain capacity threshold as strategic infrastructure developments to streamline the planning process.

The move is expected to speed up the planning process to ensure that new capacity can be built quickly.

As data centres are highly energy-intensive facilities, the sector has become active in participating in the discussion around the country’s energy landscape.

Energy accounts for roughly 50% of opex, interestingly illustrated by the fact that data centres’ capacity is measured in megawatts.

EirGrid, the Irish grid operator, is preparing for major grid reinforcements over the next five years to accommodate forecast data centre growth, especially in the Dublin area. To this end, last November [2018], the transmission operator launched a US$150 million (£119.2m €133.9m) grid enhancement scheme.

A lot of data centres are considering onsite back-up generation to eliminate blackout risks. For example, in 2017 Microsoft was forced to consider the installation of 16 gas-fired generators of a total capacity of 18MW for one of its Irish data centres following a notification from EirGrid.

In April, Amazon signed a PPA with Ireland’s first subsidy-free wind farm, the 91.2MW Donegal wind project. The project was praised as a landmark deal, as it was the country’s first PPA with a subsidy-free asset.

The deal was part of Amazon signing a total of 229MW of PPAs for three projects – in Ireland, the US and Sweden – to power all of its Amazon Web Services (AWS) global infrastructure with renewable energy.

The same month, Microsoft announced its updated green plan targeting 60% of its data centre energy needs to be met by renewable energy by 2020. By 2018, that number had reached 50%.

Equinix’s Mortell draws attention to one of the main challenges to decarbonise data centres, which is striking the balance between efficiency, security and security of energy supply that data centres require. His company has pledged to be carbon neutral by 2025.

“From an onsite generation point of view, there are opportunities to be developed over time, whether they would include solar PV, onshore wind or battery storage,” he says.

“However, at the moment most of these solutions would still require some form of other generation too.”